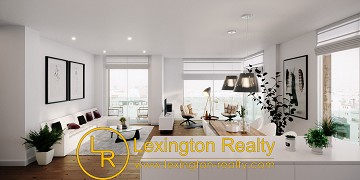 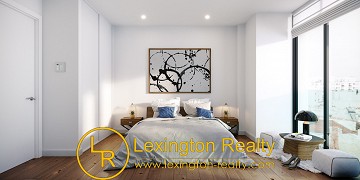 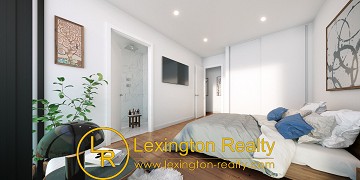 Modern flats with luxury finishes in the centre of Santa Pola, Costa Blanca.
The properties consist of 3 or 4 bedrooms and 2 bathrooms and are equipped with electric blinds, ducted air conditioning (hot and cold) and hot water by aerothermal technology.

Located 15 minutes south of Alicante Airport is the coastal fishing and tourist town of Santa Pola. The small population almost doubles in the summer with visitors enjoying its splendid beaches and enchanting marina and promenades.

The area has been inhabited since the 3rd century BC with Neolithic tools and paintings being found in the cave under the cape called the Cueva de las Arañas and remains of hunter-gatherers from the Palaeolithic era in the Cueva de las Teresitas.

The town was settled over the roman port of Portus Illicitanus which served the city of Ilici, now known as Elche. Remains of the roman port and a 4th century roman villa with original mosaic floors can still be seen in and around the Palmeral Park. It has been cited as the famous site of a roman armada ready to attack the vandals in North Africa but was torched by enemy spies and left the then emperor Majorian to return to Rome. The name Santa Pola derives from the tradition that Saint Paul the apostle arrived at the island of Tabarca located just 9km off the coast.

At the end of the 13th century Valencia and the province of Alicante had been reconquered by King Jaume I of Aragon during the Reconquista. By the 14th century the fishing and salt extraction industries were growing, bringing prosperity and population growth with it. Eventually by the 16th century, a fortress-castle was built to protect the local fishermen and sailors from the many invading Barbary pirates. It is a good example of military-renaissance architecture and today the serves as a culture centre and used for festivities and events.

Pirates had been seeking refuge on the island of Tabarca up until the end of the 18th century. So in order to remove this threat, King Carlos III ordered the fortification and population of the island in 1760 with many of the walls and gates still visible today. A group of Genoese sailors, who had come from the islet off the Tunisian town of Tabarka, suffered a shipwreck there and eventually settled on the island; giving  it its new name.

With the reduction in outside threat, the town expanded and its boundaries grew. By the 1960´s, its main source of income had transformed into tourism and its continual investment into its beaches and services has created a wonderful place to visit and live.

Having 7km of diverse south facing beaches there is something for all ages and tastes to enjoy. The calm shallow waters of playa Lisa appeal to families and adults alike whilst for those who want more adventure there are all varieties of water sports to choose from. Other beaches of note are Gran Playa, Playa Levante and the sandy Santiago Bernabeu coves all offering excellent services and disabled access.

The diverse landscape combines a 139m high cape, pine forests, sandy beaches, salt lakes and protected wetlands. The sierra de Santa Pola rises high behind the town and awards extensive panoramic views of the coastline from its sky walk platform. The view leads from Tabarca Island, along the sandy dunes of Los Arenales to the bay of Alicante; and on clear days the Sierra Helada of Benidorm and Peñon de Ifach in Calpe can be appreciated. It is one of the few examples of a fossil reef on the Mediterranean coast.

Heading south out of town leads you to the salt lakes which hold special protection as a nature reserve for wetland birds including wonderful flamingos, marbled teals, common shelducks, little egrets, Caspian gulls and black-winged stilt birds. This area is known as a bird watchers paradise and a great venue for spectacular sunsets.

There are plenty of sports and water sports available. The good weather permits a range of physical activities like jogging, cycling, hiking, mountain biking or simply relaxing walks. There is a designated area for kitesurfing in La Gola beach and Playa Lisa beach has ideal prevailing winds for windsurfing. There are several outlets to rent equipment and to receive lessons. Sailing, paddle-boarding, kayaking and diving are also very popular.

Just on the outskirt of town is the skate park with two skating pools with obstacles, a break dance area and skating for beginners. A kiosk onsite provides refreshments.

Boats and jet skis are available to hire from the port where you can experience the sea spray and motion of the waves with a little adventure.

One of the best ways to take in the views is by going paragliding off the cape where you will be lifted over the beaches to enjoy a bird’s eye view of the coastline.

Why not try a scuba diving day experience where you can discover the world below the sea as well as learn a new skill. Seasoned divers will be taken to some beautiful dive sites whilst children can enjoy a fun snorkel safari. An unforgettable experience for all the family.

Glass bottomed boats can whisk you off from the port to the island of Tabarca located just a short ride from the shore. It makes a wonderful day trip for the family to explore this quaint populated town with its old fortified walls and rocky waters ideal for snorkelling. In 1986 it was recognised as a marine reserve with crystal-clear waters and magnificent varieties of fish and flora. You can also learn about its history of being an island of piracy till the end of the 18th  century.

Take in the sights of the bustling main square, overlooked by its fortress-castle, whilst you enjoy a café con leche and ice cream. From here you can peruse the high street shops in Calle Elche, take a stroll in the shade of the palm trees in the Palmeral Park, and then dine on fresh fish overlooking the boats in the marina.

There are a variety of restaurants including international cuisine for those who want a choice. In this town of sailors you can enjoy fresh fish and seafood, all prepared with local herbs and salt, olive oil and locally sourced produce to bring colour and flavour to your plate. Arroz negro, calamares, red prawns and langostinos are some of the mouth-watering specialties on offer. Or why not try the famous Spanish tapas or a fillet of steak on one of the many outdoor terraces.

The Miramar Marina has a capacity of 234 boats between 11 and 40m and offers a full range of services whilst the Club Nautico has a total of 560 moorings for boats up to 15m. There is also an officially approved sailing and rowing school, a gymnasium, restaurant and bar on site.

The Caleta Dels Gossets is the official dog beach situated just under the cape in beautiful surroundings. A wonderful place to share the beach life with your pet on a summer’s day.

The Pola Park is a marvellous way to spend the day with a young family, with over 30 rides and attractions aimed for persons of all ages. Hours of fun can be had here with many rides for parents and infants to share together.

The Aquarium is the oldest in the Valencian community and offers an impressive array of local fish and sea life in its modest setting. It serves as an excellent educational and recreational tool and is an inexpensive escape into a cool and tranquil atmosphere.

There are three museums for enlightenment and culture. The Maritime Museum located in the castle has three sections describing the local history and archaeology, the tradition of fishing as well as the historical background of music and the sea. The Salt Museum is set in the nature reserve and offers visitors an insight into the salt extraction process and its history. The Boat Museum Esteban Gonzalez gives you the opportunity to find out what life is like on board a genuine fishing boat with a guided tour and an explanation of its importance to the local economy and social development. It is located in Plaza Constitucion near the town hall.

Easter, as in all Spanish towns, is a major religious event in their calendar in tribute to the Passion of Jesus Christ which features traditional parades with wonderful garments and floats.

Santa Pola celebrates its local fiestas during the first week of September in honour of the patron saint Virgen de Loreto and the reconquest called Moors and Christians. Although it can get quite raucous, its parades and great ambience of fun and joviality shouldn’t be missed.

For further information on properties for sale in Santa Pola please visit www.lexington-realty.com 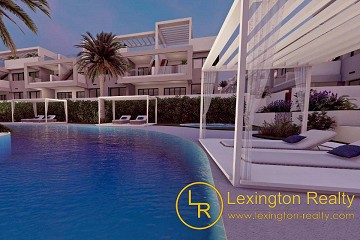 Apartment in luxury resort in Torrevieja 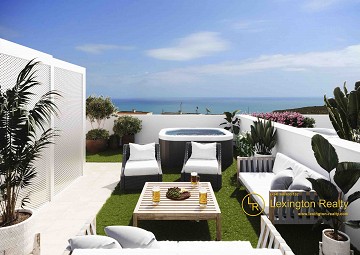