Villas for sale in San Pedro del Pinatar and Pilar de la Horadada. New detached villas with a modern and avant-garde desing are available for sale with Lexington Realty. They contain three bedrooms and two spacious bathrooms, potential to a solarium and extra bedroom. Villas have spacious garden and private pool. Modern desing kitchen has marble worktop and LED lightning. The properties have attractive LED lighting through it. Backlit Onyx marble with LEDs in living room area. Villas are located in two areas in the South-East of Spain. There are two charming coastal towns - San Pedro del Pinatar and Pilar de la Horadada. The beauty of local beaches and lagoons attract a lot of visitors during the whole year. A lot of restaurants and bars, shopping areas and different amenties are in a short distance. Alicante Airoprt in a half an hour drive. Lexington Realty - property in Alicante. 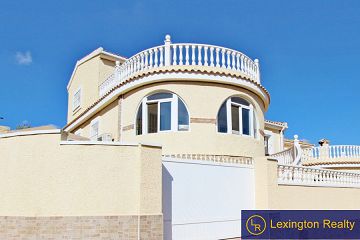 Villa for sale in Gran Alacant

Villa for sale in Orihuela